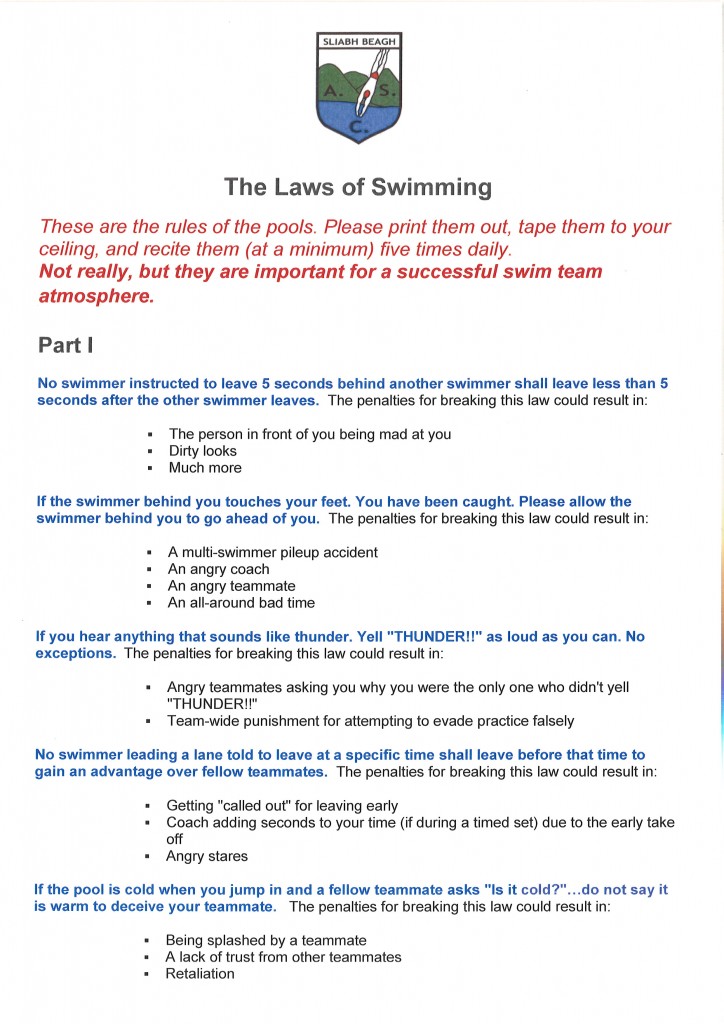 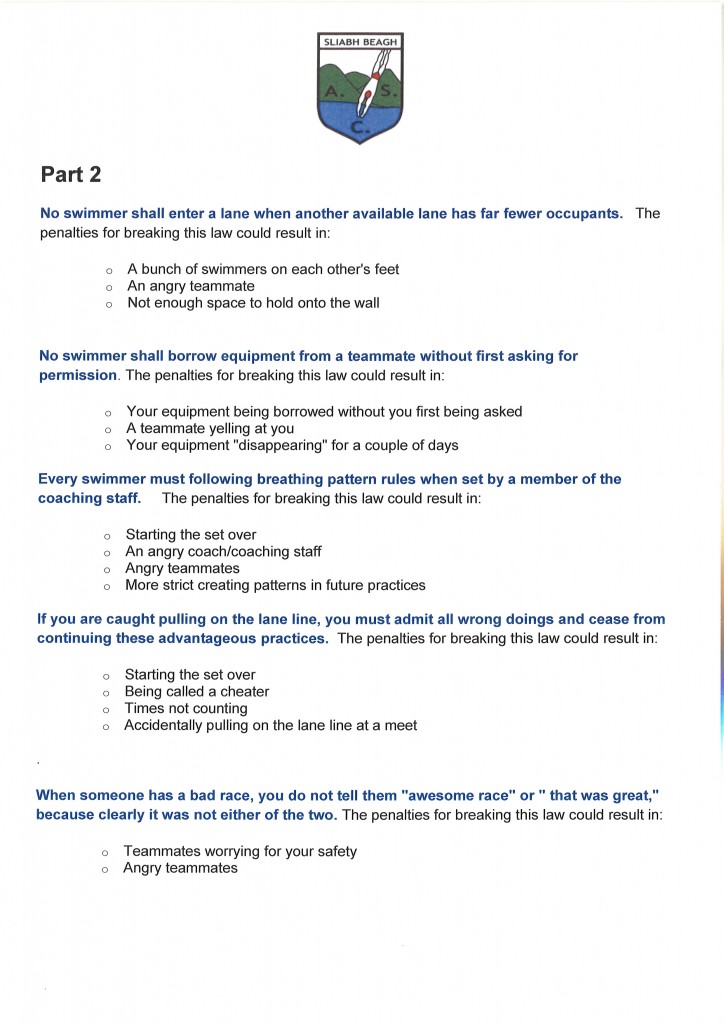 As the business end of the season starts to evolve all swimmers will have to start making their newly issued lactate training times every set and every session. They will also need to set specific goals for their championship season. For some this is getting to development games and experiencing longer races. For others it is getting Div 1 or Div 2 or open championship times of even qualifying for the Commonwealth games Ulster squad or European events. It is all relative but the common denominator is work rate, technical improvement, fitness, attitude and ambition. It is about going faster in the key areas of underwater and changing direction – making yards on those ‘Any Given Sunday Film “inches”‘. It is also about not looking at the opposition and being negative about your chances, but rather maximising your strengths and slightly fixing your current weaknesses. As a famous 3 Michelin Start Chef said recently “getting the award is the easy bit, keeping it is a lot harder”. So climb the competition ladder gradually, learn and improve as you climb and when you have all the elements in place stepping onto the podium will be automatic.

The 2014 competition season will run for some until June and for others late July.  Competitions that are coming up that will get you to these summer galas are as follows; Ulster Development Galas, Leinster Graded Galas, Ulster Qualifying and Age Group and Youth championships and Leinster Distance and Open championships. There are also some national events such as the Dave McCullough and Spring championships. If you are unsure what to enter talk to your squad coach. A meeting will be held shortly to help in event selection and goal setting too.

You are what you eat
All swimmers should now be aware of what they eat and drink and the quantity and type of each. Firstly every swimmer should be bringing a water bottle full of water or very slightly flavoured with orange or Ribena. Eating processed food or take away type food is not recommended. Eating sugar rich food or sweetened food regularly is also a problem as it puts on weight that is hard to shift. This can range from cereals to fizzy drinks from many low fat foods to crisps. So monitor your intake and cut down. Again talk to your squad coach if you need help.

The great Seve Ballesteros (Golfer) once said ‘maybe I should go to a sports shop and buy a trophy. That’s the only way I am going to get one.’ Welshman Jamie Donaldson (who? He is a tennis player) claimed his first trophy after 254 previous attempts. The 36 year old when asked what kept him going said ‘It’s just being a case of keeping going, because I knew what I was doing was right.’ Andy Murray the Scottish tennis player who was the nearly man for years and now in a few months is Olympic and US Open champion. He is recognised by all at the top end of tennis as having an unwavering determination to get better and to put defeat behind him and to try to improve for the next opportunity.

The following are advice nuggets for all involved in competitive sport;

Theodore Roosevelt – a former US President once wrote – “It is not the critic who counts, not the man who points out how the strong man stumbles, or where the doer of deeds could have done them better. The credit belongs to the man in the arena, whose face is marred by dust and sweat and blood, who strives valiantly… who knows the great enthusiasms, the great devotions, who spends himself in a worthy cause, who at best knows in the end the triumph of high achievement, and who at the worst, if he fails, at least fails while daring greatly, so that his place shall never be with those cold and timid souls who know neither victory or defeat.”

Summer is approaching and the big competitions are on the horizon.  For some this is the Aqua Sprint Finals and the Community Games event, but for most of our club athletes it is the Division 2 National Championships and for some others it will be the Division 1 and Irish Open .  For others it will also include the Triathlon events.

So to be ready to compete we must focus on the critical elements of training. These include technique, sleep, hydration, nutrition and training like you intend to compete, i.e. FAST. The following short article gives you the reason why you as an athlete need to be motivated, be resilient, be ambitious, and not afraid to PUSH (Poem that says it all on the notice board).

The distribution of fast-twitch fibres is actually fairly evenly distributed between our muscles at birth. Most of us will possess somewhere between 45-55% fast-twitch and 45-55% slow-twitch fibres.  The reality is, fast-twitch fibres are quite lazy. They need to be prodded into action by considerable mental input. This increases the flow of electrical impulses to the motor units and literally ‘switches them on’.

For the majority, our speed and power depends on the way our sporting experiences are shaped and crucially, how we train our muscle fibres throughout our sporting career.

The key to unlocking maximal speed lies in training. Without training we will be neither super-endurance, nor super-fast, strong or powerful.

Training fast-twitch fibre correctly and consistently is the key to improved strength, speed and power. And that training comes in three parts.

The enhancement of speed relies not only on training

Last week we were asking..

They can effect Cortisol levels

Answer – Some good, some bad!

Answer: It depends – why? ‘Athlete’ is a very broad term and relates to marathon runners, swimmers, divers and weightlifters alike. There is a need to be specific with the carbohydrate intake! This is the case with the other macro nutrients too. This will also change for a single athlete based on the training phase and the specific day whether it be a training or rest day.

This week we are asking..

Helping Swimmers Zero In on the Perfect Push-Off

There are basically only two kinds of push-offs:  Good Ones and Bad Ones.   The good ones give swimmers a forceful burst of speed off every wall. The bad ones tend to grind to a halt before they ever get started. When a swimmer loses a race by a narrow margin, push-offs sometimes take the blame for the loss. By the same token, push-offs sometimes get the credit when a swimmer wins by a touch. Either way, it’s easy to see that push-offs have the potential to make or break a race.

When performed correctly, a push-off employs the human body’s most effective posture for minimizing resistance through water.  And resistance-reducing measures are clearly called for since water is about 800 times denser than air.  In fact, water is so dense that a bullet fired into a body of water will lose all velocity after travelling less than eight feet.  It is water’s tremendous stopping power that compels swimmers to minimize resistance whenever possible.