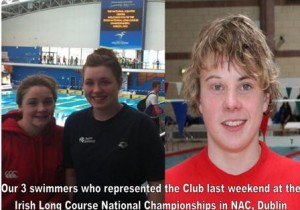 The Last weekend of April saw the best swimmers in Ireland, Egypt, Hungary, England, Scotland and Belgium were competing in the National Aquatic Centre in the Irish 50m pool championships. Many swimmers there were chasing qualifying times for the World, European and European Youth Olympic Events. Some Irish, Egyptian and Hungarian swimmers made these qualifying times in the different events.  Irish, Hungarian and Egyptian records were also broken over the weekend.

Sliabh Beagh were represented at this gala by Deribhile Coll swimming the 400, 800 and 1,500 m Freestyle, Alannah Leonard swimming in the 50, 100 and 200 Backstroke, 50 and 100 Freestyle and the 200 and 400 IM events. Finally Ross Delaney swam in the 200 Freestyle and 200 Butterfly events.  The swims were good with PB’s or very close to PB being achieved by all swimmers. Some technical changes to their strokes has been ongoing over the last few months and this was evident in the technical side of the swim but it may have cost them all a little in time improvement. This however is acceptable but progress is expected come June and July for everybody (those at this gala and those not attending).

Ross made the finals in 200 Fly. Alannah made the final in 100 and 200 Back, 200 and 400 IM. Deribhile did not have finals in her events – these longer events are straight heat swims with the winner being the person with the fastest time. Deribhile set PB’s and made the National squad time in the 1500m.

Well done to all our swimmers over the weekend.  It requires character to try changing a technical aspect of a stroke and to accept that you may end up going slower for a time. This is difficult in front of your peers and the critical eye of squad coaches. However the change has begun and the effect was not detrimental.  In other sports it has been done in the public eye, such as Tiger Wood and Padraig Harrington in Golf. Ian Thorpe tried it too in preparing for the last Olympics. His problem was he left it too late to start his modifications.  Hopefully our modifications, with all our swimmers is better timed and that all will have smiles come June and July.

The intensity of the work has already commenced, preparing everyone to swim faster, harder and for longer as the real championship season comes into focus in late May through July. 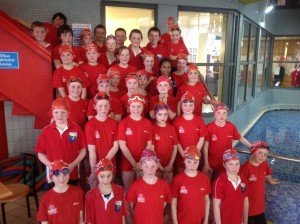 All roads now leads to the final on June 7th were Sliabh Beagh will compete against Newry & Mourne and Limavady for 1st, 2nd and 3rd place.  This is an excellent result for this young team to reach the final as they had just been promoted to Division III in June 2012.

The final promises to be a close call as only a few points separated those 3 teams in the preliminary round.    So get your Banners and Bunting ready to support our house for what promises to be a very exciting final!!