This was a short course meet, that means the pool length was 25m.
This was the first Gala of the season and consequently there were very big number of swimmers attending from all over the country. The programme offered a wide range of events from 50m to 400m.  Between our team of swimmers, we entered almost all the
different events on the schedule.   We had ten swimmers entered, but due to unforeseen circumstances, nine swimmers
attended. We had Joe Shields, Carmel O&#39;Hare, Thomas Neeson, Eithne Duffy, Peter Coyle, Eimear Mullen, Marcin Tobias, Brenda Healy and Marc Hearty.  The team swam in individual
and relay events.  Performances were very strong and learning, trying things out like tumble turns under pressure and not having a lot of rest between events, were big challenges.   Confidence was gained via improved times, picking up some medals, being up against some very experienced and competent swimmers, seeing some skills work out and being not fazed by swimming under pressure in this very intimidating and impressive national venue. 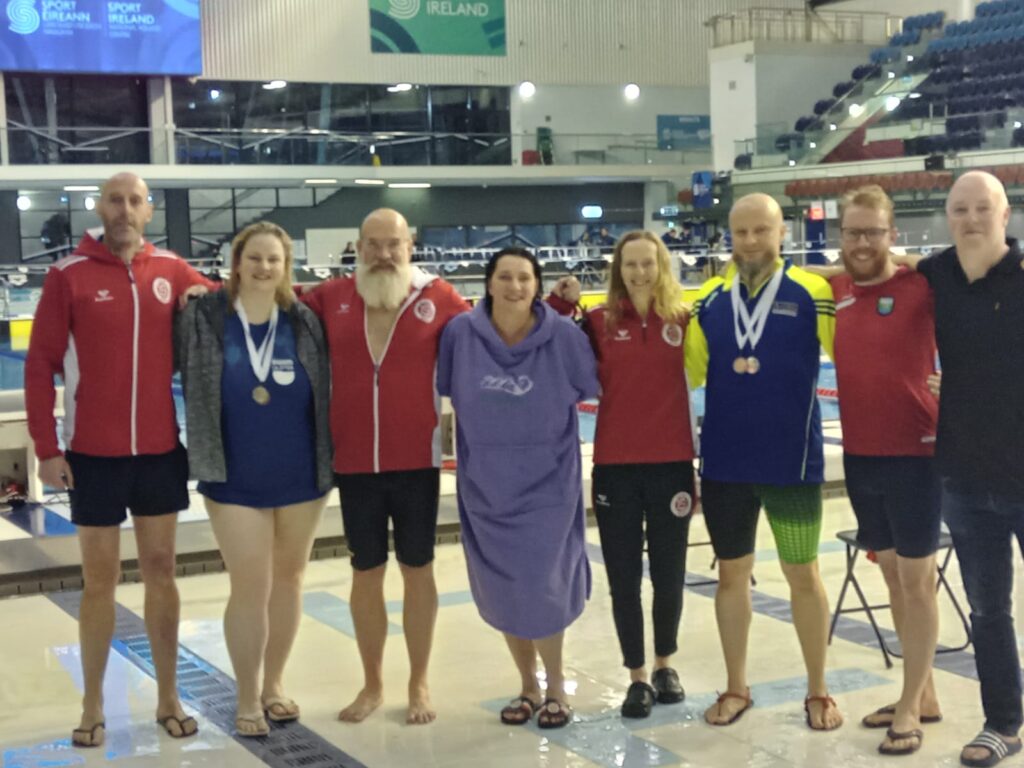 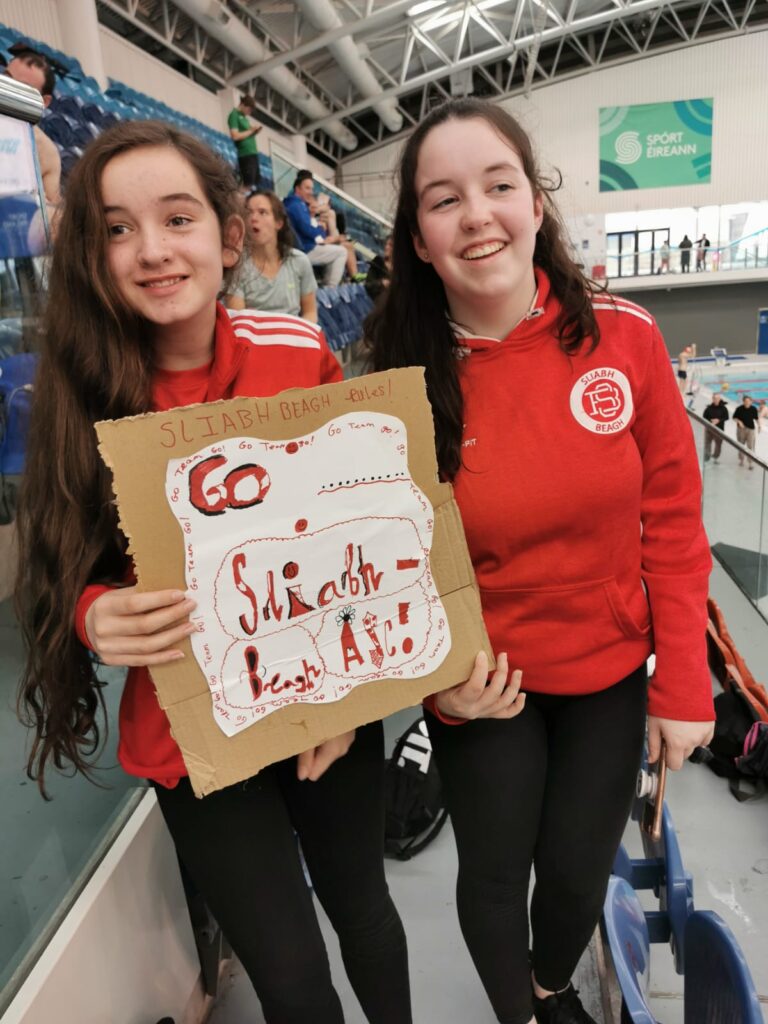 Well done everyone.   Keep up the good work and let those in attendance and those unable to go on this occasion, knuckle down and get ready for the next day’s outing.   Sunday was fun, exciting, challenging and very much worth the effort.  Onward and upwards everyone.

Thanks to Coach Eamon for attending with the team and for his encouragement and feedback to the swimmers.

This meet was held in Belfast on 4 th – 6 th Nov. Clubs from all over Ulster were in attendance and swimmers had to qualify for this gala in order to compete.   We had five swimmers entered in this
gala; Maddie Smith, Aoibhín MacCinna, Adam Lynch, Darragh Hughes and Rebekah Gillis.   Again, for early in the season, results were a mixed bag, some races with personal best times and some finals were made.   We entered two mixed relays on the day as well, finishing in 6 th place.  Coach Pearse McGuigan was on hand to advise and give feedback on the swims. 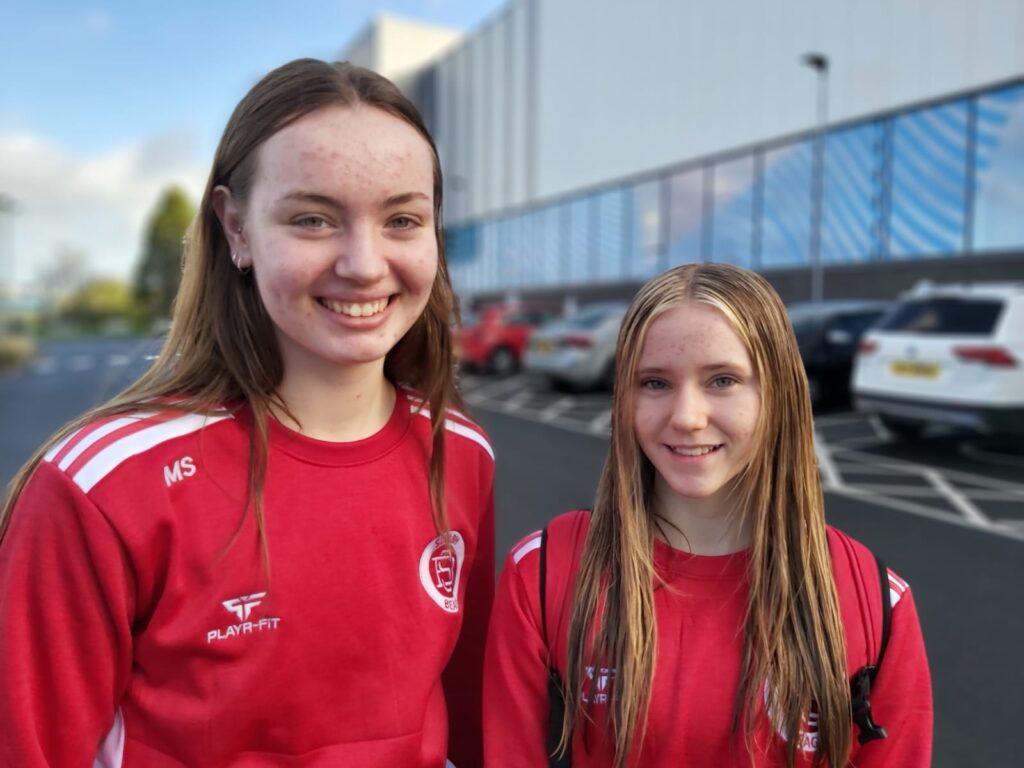 Well done to all the swimmers, it was a long weekend of swimming and lots to work on for the season ahead.

We had a group of swimmers attend this meet on 29 Oct in Dublin. Swimmers who attended were Ben Duffy, Rebekah Gillis, Sean Greenan, Darragh Hughes, Kristupas Januskevic, Adam Lynch,
Aoibhín MacCinna, Katherine Ryan and Edvardas Zumaras.
Our athletes swam in four to six events on the day and performances were generally very good for a first gala of the new season.   Adam had a great day and finished in 3 rd place in the 400free event and 4 th place in the 200IM.   In fact, Adam finished in the top ten in all his races bar one.   Well done Adam.
Darragh also had a good day, claiming first place in the 50Brs event and 4th in the 200Brs while finishing in the top ten in all his events.
Some swimmers gained massive pb times; Katherine Ryan swam strongly in the 400IM and managed to take an enormous 20 seconds off her previous best time in this event.   Adam Lynch had an
exceptional swim in the 200free event, knocking a massive 13.30 seconds off his previous best time winning his heat with ease. Edvardas had a strong swim in the 200free event taking over seven
seconds off his previous best time in this event. Other good personal best times were achieved by Ben Duffy in the 200back, Darragh Hughes in the 400free, Kristupas Januskevic in the 200free,
Aoibhín in the 100IM and Katherine in the 200back. 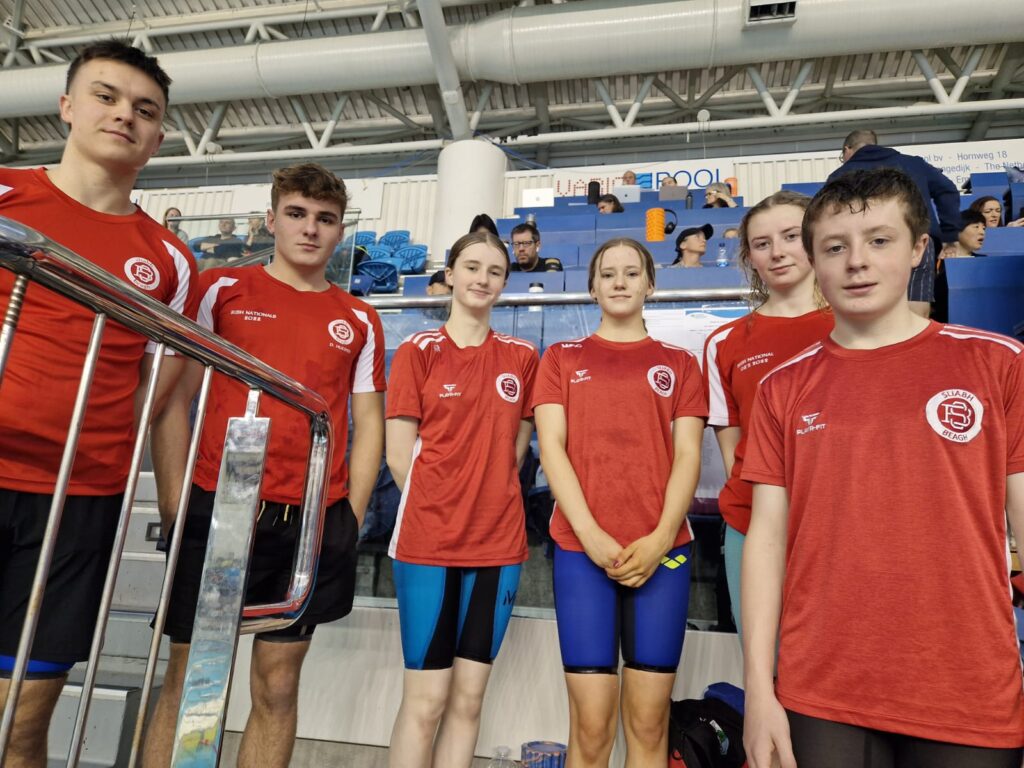 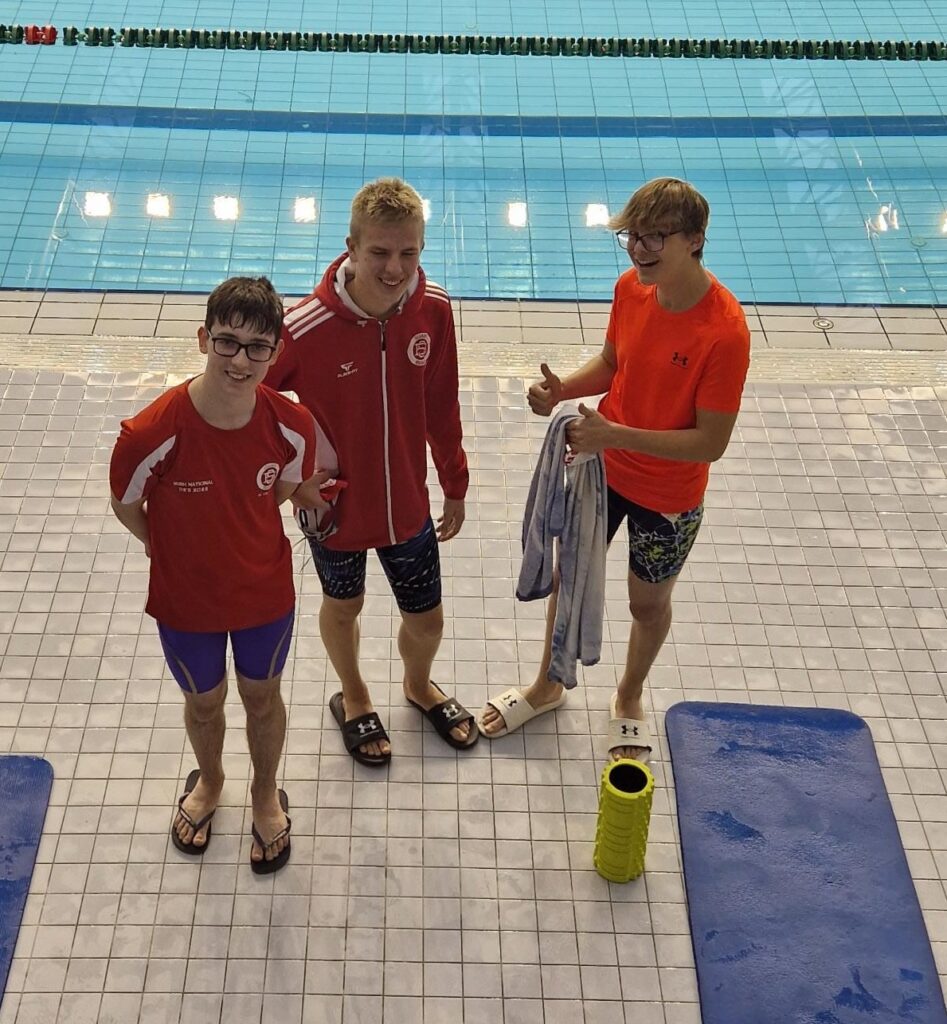 Great to see so many good swims at this first gala of the season, keep up the hard work everyone and plenty to work on going forward too.  Thanks to Pearse for his feedback to the swimmers.

This meet took place from July 20th to 24th in the National Aquatic Centre. There were Clubs from all over Ireland at this meet along with some swimmers from abroad.  We had four swimmers qualify to swim in this competition. 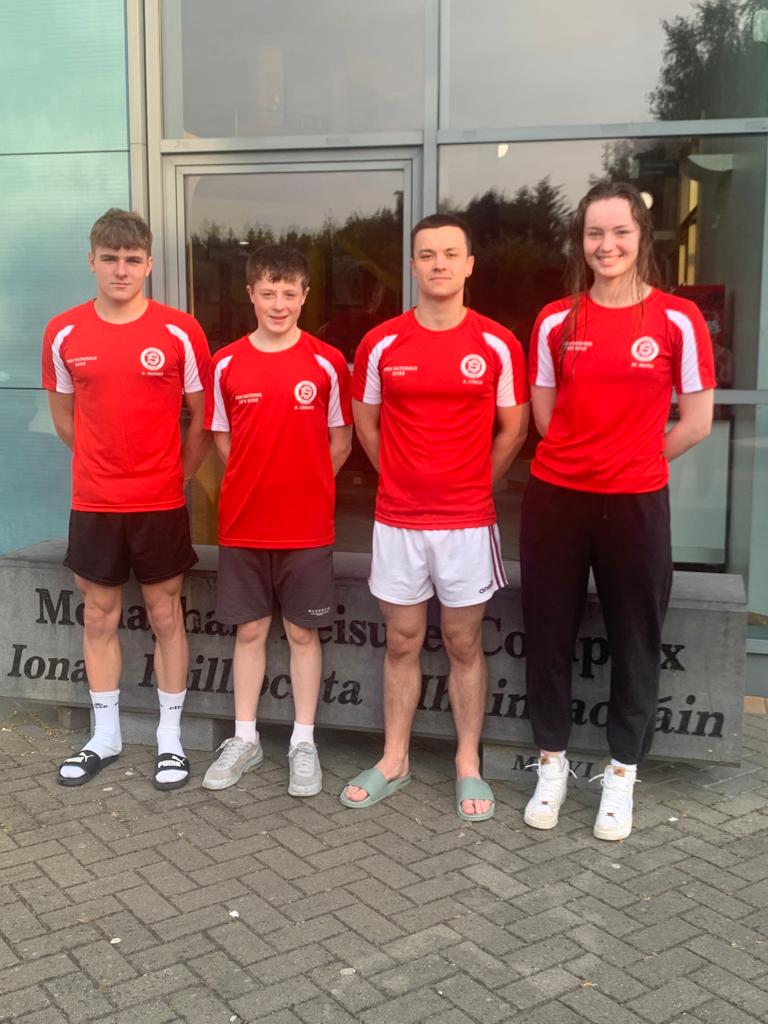 Darragh Hughes, from Monaghan town, qualified in several events. His first event was the 100Brs, where he qualified for the finals and finished in an impressive 6th place overall. He went on then to
compete in the 50fr where he finished in a not-too-shabby 14 th place overall. Darragh has only recently taken on the 100fly race and he has realised he is actually quite good at it, again making the
finals in 8 th place in a pb time.  Darragh opted out of the final however to concentrate on his other events. In the 100fr Darragh again swam strongly to finish in 13th place overall. The 200Br was where Darragh really shone at this meet, knocking a massive 8 seconds off his previous best time to qualify for the final in 5 th place. His last event was the 200IM where again Darragh produced a massive pb of 4.75 seconds to finish in 16 th overall.  This was a great meet for this 16 year old to be swimming against the country’s finest swimmers and doing so well in the process. All the work and dedication to training is paying off for Darragh, well done. 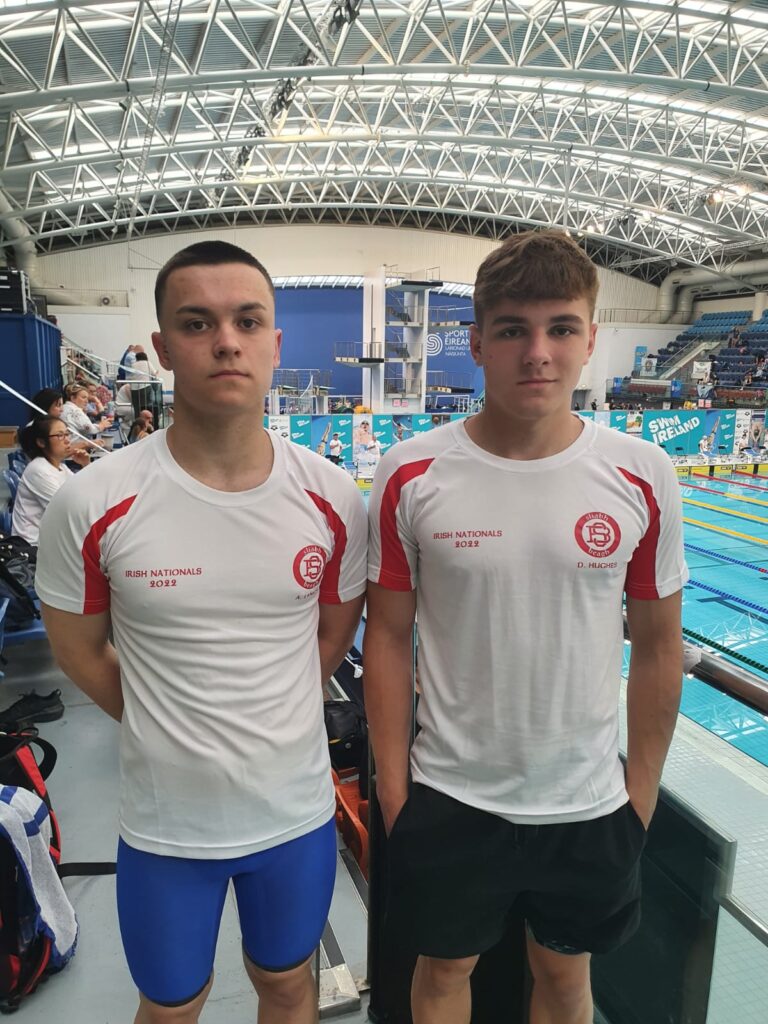 Adam Lynch also from Monaghan town qualified in three events. Adams favoured stroke is Fly and he had qualified in both the 100fly and 200fly events. In the 100fly he finished in 15th overall with a
strong pb swim. Adam had a fantastic race in the 200fly, with a super pb time of 6.81 seconds off his previous best time. This was good enough to give Adam a place in the finals where he swam well to
finish in 9th place overall. A great achievement for Adam to finish in the top 10 among this caliber of swimmers. In the 200IM Adam again had a terrific swim, knocking nearly 3 seconds off his best time
to finish in 21st place. Interestingly Adam had been seeded 33 rd before this event and finished in 21st place, so that was a terrific improvement for him.   Well done Adam, the long hours in the pool and gym are paying off for you. 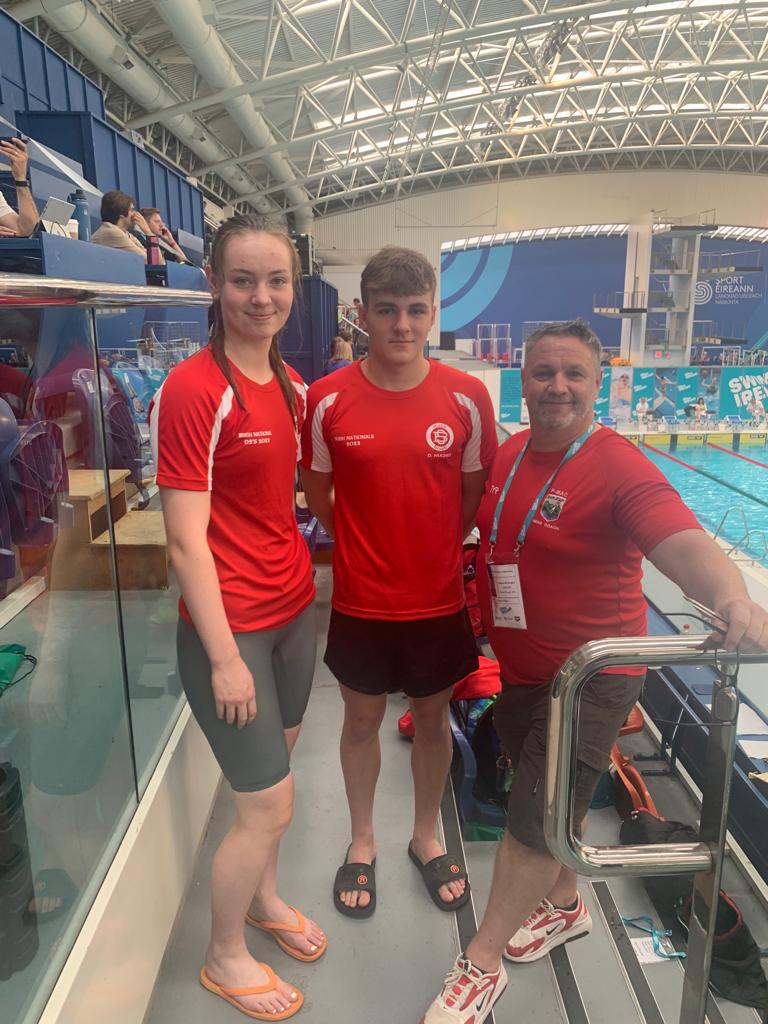 Maddie Smith from Carrickmacross had qualified in one event in this Meet, 100Brs.  As were the rules, she was allowed to pick a bonus swim in the same stroke so Maddie also swam in the 200Brs.
In the 100Brs, Maddie had a great strong swim, seeing her come from 25th seed to 20th with a nice pb time of nearly 3 seconds.  In her bonus swim of the 200Brs, this was where Maddie really shone, she swam brilliantly to finish in 13th place overall with a gutsy swim against the best in the country.  This was a terrific achievement for Maddie in a race that she had not qualified for.  Well done Maddie on
a great seasons swimming! 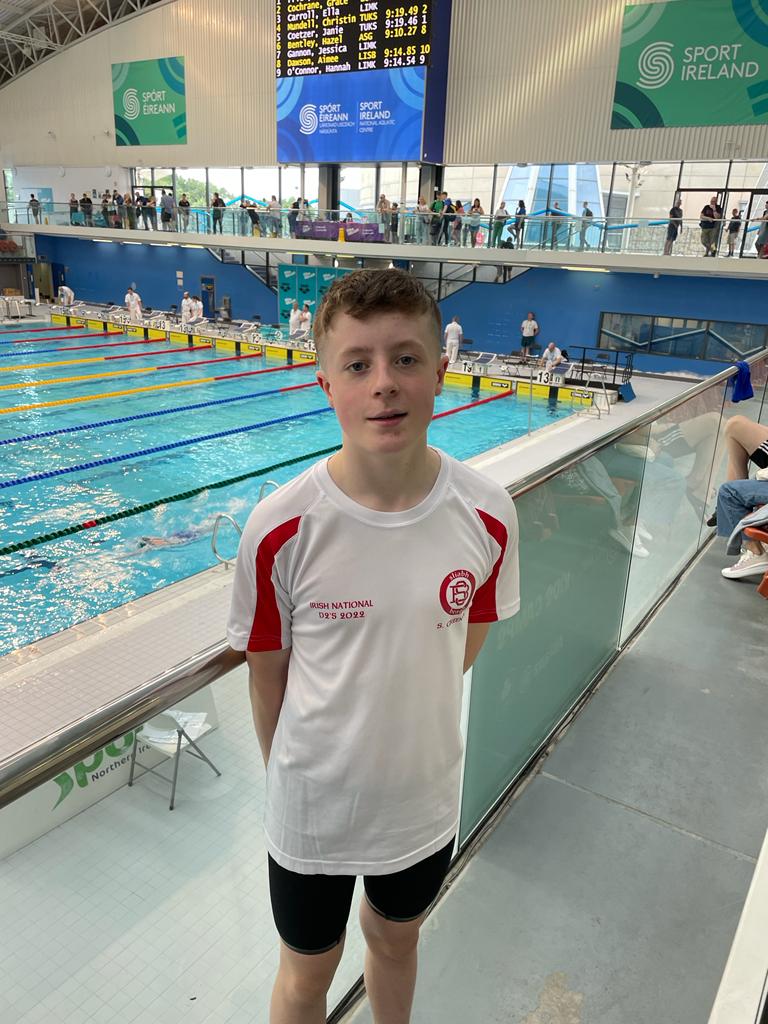 Our last competitor was thirteen year old Sean Greenan from Rockcorry.  Sean, like Maddie, had qualified in one event, in his case, the 50free.  He chose the 100free as his additional swim. In the
100free Sean swam to his pb time, finishing in 34th place. The 50m events are difficult as there was less than 5 seconds between the person who came 1 st and the person who came last, so the margins
are tight.  In the 100Free Sean achieved a pb of 1.40 seconds off his previous best time, again finishing in 34 th place.  This Meet will have given Sean a great experience that will stand to him next year.  Sean has worked extremely hard this season, having had great success in the Div2 Meet several weeks ago, to being our youngest qualifier to the Div1 Meet, the future is bright for this young man.

Massive thanks must go to our Head Coach Pearse McGuigan who has encouraged and coached these swimmers all season.  Pearse wanted full commitment from the swimmers and the results of
the season overall show that our swimmers have taken all of this on board and have stepped up a gear.  I think we can all see the progression of all our swimmers, from the Development swimmers
right up to our Senior group.

We are always available to accept new members to our Club, send a message via our social media channels and we will get back to you with a time for a trial. 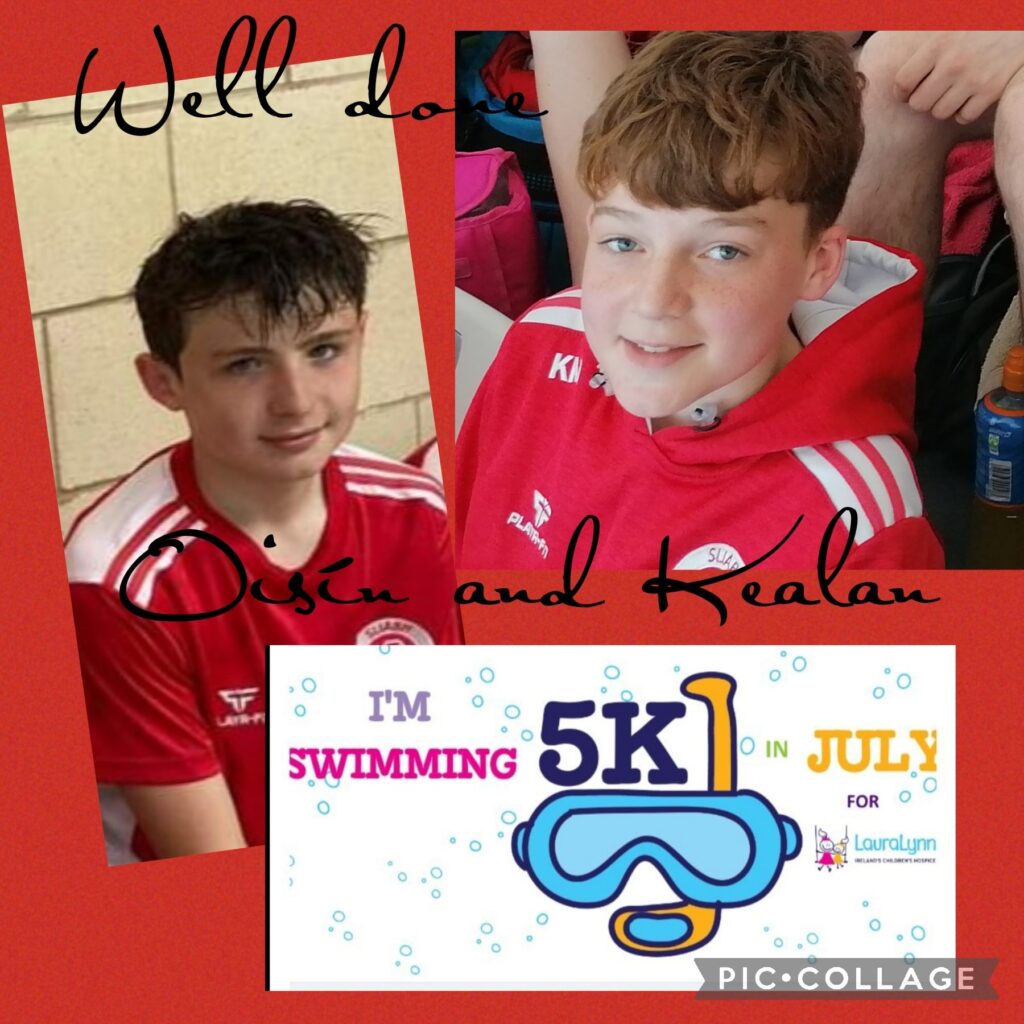 Well done to two of our younger boys, Oisín Rankin and Kealan Morgan who raised money for a great charity this July by swimming 5km when they were on summer break from training. 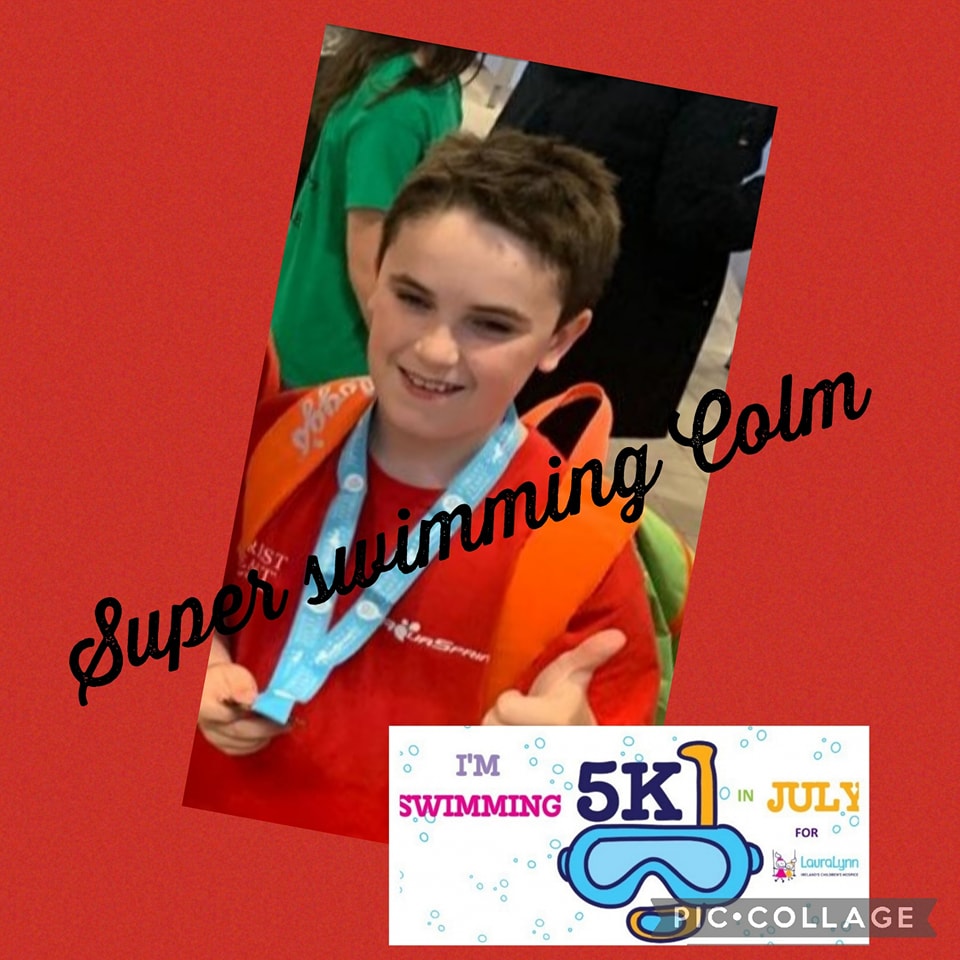 Also to Colm Duffy who not only swam 5km in July for Charity, but instead swam 10km!  A great achievement for Colm and we are sure the Laura Lynn foundation will be very grateful to Colm for his fine fundraising efforts.

Thanks to Monaghan Coral Leisure Complex for facilitating the boys