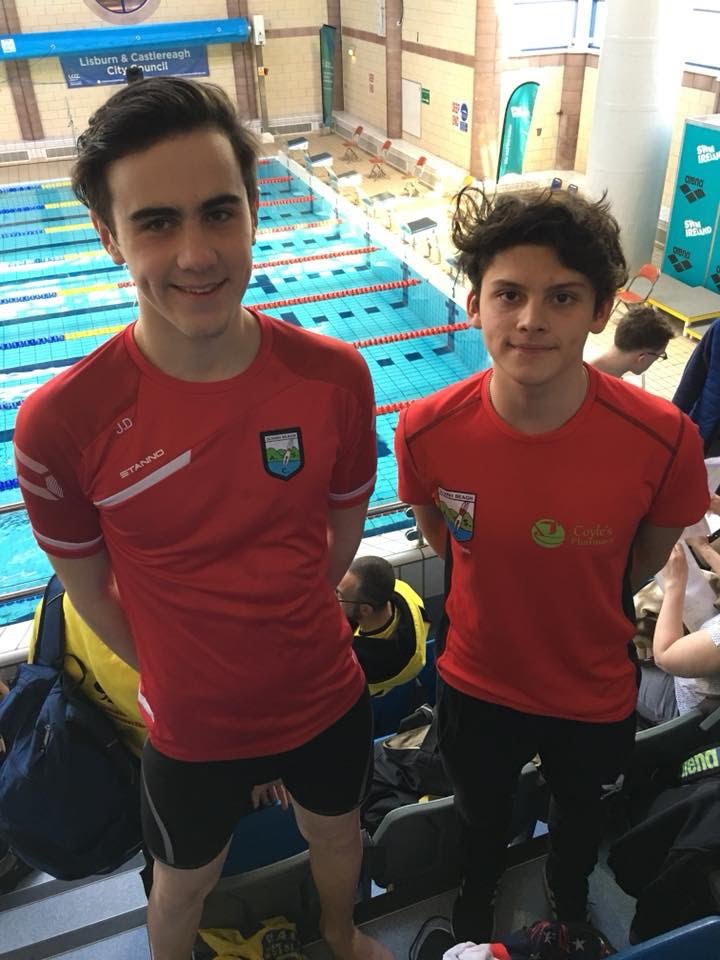 These championships were held in Lisburn Lagan Valley Leisureplex from Thursday 14 Dec to Sunday 17 Dec inclusive.

Senior swimmers from all over Ireland and a few from Norway and the UK also attended. The standard was high and medals were  hard earned.    Sliabh Beagh were represented on this occasion by John Donnelly and Enrique Rosada Lara. Both boys swam very well in all events, picking up PBs and swims in finals.

John swam in the 50 and 100 Breaststroke heats and qualified for the final in both these events. John also swain the heat of 50 Butterfly, 100 IM and 50 Free. John’s progress has been steady, with improvement in his technique, speed endurance and race strategy. He needs to continue to develop these assets and to now work on his strength, endurance and starting speed. All very achievable, with solid work and continuous practice and review, John can make  an impact at Ulster and National level. Well done John!

Enrique swam the 200 Fly, 100, 200 and 400 Freestyle events. Enrique achieved PBs in the 200 Fly, 200 Free and 400 Free. He narrowly missed out on the 100 Free for a PB. Enrique swam well, competed and got rewards. However, after some discussion, it was agreed he needed to slightly modify his stroke, in order to get more propulsion from every stroke. He also needed to get a better push off after every forward tumble turn. These require a good bit of cognitive effort and real time repetition. This will take a month to so and should contribute to improved swim efficiency, faster times and closing in on a medal. Well done Enrique!

Both boys swims will be a big lift to all their teammates and an indication, that we are moving in the right direction, preparation wise.   So, all in all John and Enrique performed very well. They put down a personal marker, a team indicator and they now know what they have to do to be ready for the Summer Ulster and National championships.

In general the coach took some general points from observing other swimmers in action at the Championships and speaking with fellow coaches. The bottom line is, continually develop swim skills – streamlining, sculling, kicking, starts and turns and to significantly increase the aerobic and anaerobic bases, so that all our swimmers can confidently be a lot more aggressive when racing.

On Sunday 10th December eight of our younger swimmers ignored the weather warnings and travelled to the National Aquatic Centre for the Swim Ireland Christmas Cracker Gala.  This gala was aimed at novice swimmers aged between 9 and 12 years and it promised to be a fun day with plenty of Christmas cheer.  Our team of eight comprised of Adam Lynch, Hannah Sheridan, Ben Duffy, Cormac McMahon, Maria Nowacka, Tadgh Lennon, Eimear Duffy and Aoife McKenna and there was a great sense of camaraderie between them cheering each other on in their races. Our swimmers all performed well and should be very proud of themselves, getting PB times in many races.  The two big performances of the day were by our two oldest swimmers in this gala, Adam and Hannah who both secured Silver medals in the 100m Individual Medley race U12. Both swimmers swam very well in this event and were very deserving of the silverware, presented by Santa no less.  Disappointingly the gala had to be cut short due to pool issues so while not everyone got to swim each of their chosen races, they all enjoyed the morning of swimming in a very festive atmosphere

The club executive and committee would like to extend our deepest sympathy to Éadaoin & Stephen McGeough and their family on the recent death of Mrs Dympna Moore, Clones mother of Éadaoin and grandmother of Fiona, Caitriona & Ursula. May she Rest in Peace.

The club executive would like to wish all swimmers, parents and coaches a very happy Christmas, and good health in 2018. The club looks forward to another successful swimming year in 2018.