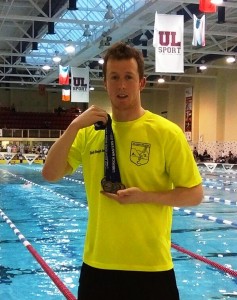 First up was the 200 m Freestyle where he clocked 2.13.50 giving him his first gold medal. In this race he went out in front from the off and lead all the way to the finish. He was mindful that the winner of the 1500m race from the previous night was in this race, he decided to keep the pace at a high tempo, to take the endurance advantage the other swimmer may have had. In the end he held off his opponent with a powerful last 50m swim.

This swim was followed by the 100 m Butterfly, where he churned out a new personal best time of 1.03.05. This was a close encounter. He was second after the half way point but a good turn and underwater action propelled him to overtake the swimmer in the lane next to him, enabling him to carry it home and earn gold number two.

In the afternoon session, the first swim up was the 100 m Freestyle (or Frontcrawl as some people refer to it) event. Despite going out hard and winning gold, on reflection he felt his time of 58.18 could of been bettered, had it not been for loss of focus (i.e. worrying about the competition) and rhythm in the final stages. Nevertheless he delivered a small PB and the gold medal again.

Peter’s last two swims of the day consisted of 50 m Butterfly and 50 m Freestyle. These one length distance races (the pool is 50m long), require flat out precision and execution of start, underwater work, breakout coupled with  limited breath taking, application of maximum power, speed  all done technically well and of course a good finish.

Peter’s own assessment of meeting these criteria he believed was good, but there is a requirement to improve some of these elements for his next outing in mid-summer, probably in Ireland but possibly abroad. In typical swim sprint style these races were very close to call but Peter edged out his opponents just marginally, finishing 27.79 for the 50 m fly and 26.13 for the 50 m free.

Also with that in mind congratulations are in order to the 350 plus participants who came not just from other clubs around Ireland, North and South, but from all across Britain, Spain, Italy, Greece, Poland and the Czech Republic.

Peter recently completed a Masters in Geography and Politics in UCD. He trains with Sliabh Beagh ASC Monday to Friday and some Sundays. All this training occurs before 8 am. Why? It is the only time that the club can get lanes and have uninterrupted quality training time. This goes for most clubs around the world indeed, thus the early start.

Two other swimmers from Monaghan were also at this gala. Ex club swimmer Christina McAree, has just recently returned to the sport after completing her nursing studies. Christina was representing Aer Lingus at the gala. Mary Bramley, who represents ILDSA, but who trains with Sliabh Beagh was also competing. Unfortunately Mary was carrying a flu into the gala, had missed 10 days training and had to withdraw after her first event as she felt unwell. Such are the vagaries of sport.