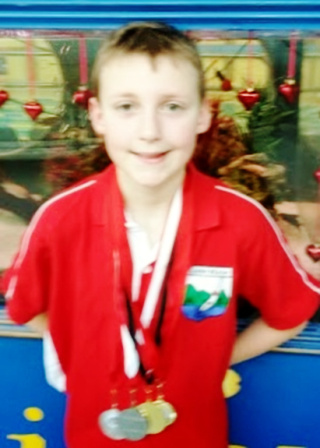 This qualifying gala was held one week before Valentine’s weekend. Seven club swimmers attended and one had to withdraw due to illness. The weekend (swims were on Friday evening, Saturday and Sunday), was very successful for all attending swimmers. Personal best times were returned in all strokes and from 100m to 1500m. Additionally, most swimmers picked up medals for their age group. However the most pleasing aspect was the fact that all swimmers achieved qualifying times for the National Competitions at Division 1 or Division 2 grade in June and July.  The next step for all – coaches, swimmers, parents, club officials is to plan and execute a quality programme of training at both 25 and 50m pools so that we are ready to compete at National level.  To make this next step all swimmers must work hard and smart and leave no stone unturned in the following areas, swim training, technique, starts and turns, gym, nutrition, rest and mental characteristics such as attitude, determination, awareness, guts and motivation.

As Sun Tsu said in the ‘Art of War’ ‘a journey of 10,000 miles begins with the first step.’ That is now taken this season.  The weekend also saw a number of firsts and all were not medals.  Well done to Lorcan Roberts who competed in his first qualifying gala.  Lorcan had a number of great swims especially the 200 Freestyle were he gained his first Division Two time. Ciaran Deasy completed his first 1500m Freestyle with an impressive time of 18.58, and Colin Gorman gained his first Division One time in the 400IM.  Also well done to Jordan Mc Shane, Megan mc Shane, Nathen Shields, and Emer Sheridan.

In preparation for the upcoming Ulster Age group championship  which will be held at the end of March in Bangor over  the 50M distance.  A number of 50m training sessions have been organised during the mid-term break.  The sessions are targeted at swimmers with Ulster age Group times.  The sessions are as follows, Friday 21st February  1pm to 3pm and Sunday 23rd 10am to 12 noon and 2pm to 4pm.

The club has selected this as the next club gala. It is hoped that there will be a large number of entries and swimmers will try out some different strokes and distances. Coach Dana would asked that everyone from the junior and senior Aquasprint squad, send their entries through her, as there will be an opportunity to put together some relay teams for this gala. This should be done no later than Friday 21st. looking forward to a fun gala everyone!