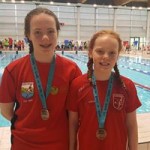 The came. They saw. They conquered…

This is a famous quote from Roman history. Well from the 21 to the 23 April, Sliabh Beagh swimmers, competed, fought, dug deep and triumphed in a range or different strokes, distances and challenges.

The bottom line is we are a small club, striving to compete with huge organisations, with enormous resources, numbers and experience. To be in the same arena, putting it up to them regularly and having the composure to finish strong in heats and finals is phenomenal.

We were challenging massive clubs such as Ards, Bangor, Lisburn, Larne, Aer Lings and Leinster Junior squad. We do however try to prepare well with a focus always on skill execution and ongoing modification.

During this gala, every swimmer tried to do the things they have been practicing. when the pressure came on, they dug deep physically and really worked at the skills and it paid off, resulting for some in medals, others making finals and all getting PB”s.

Every swimmer delivered in some way. For Allison, who has been out of action for most of the season through injury, swimming PB”s,  getting to a final and being first reserve was really pleasing.

Faolan and Katie produced. Faolan swam new PB”s,  made a final and was squeezed out of a medal in the 100 Back crawl by 2 hundredth of a second. Katie, had to deal with great swims and not so great swims. She had to manage her nerves, but she did and went out and made a final in her next race.  Super!!! Ellen, was making her first appearance at this level. She swam the 100 Breaststroke and was on the relay squad. Ellen swam the 100 Breaststroke  with competence, aggression and great composure. Turns and kicking were very effective and this was great to witness.

John, Leon and Matthew were in tough events and against very accomplished swimmers. Nevertheless they performed exceptionally, making finals, obtaining PB’s, getting great experience and picked up a few medals. All swam in several events  from relay to 400 Free. This weekend all three really tried to adapt their swim technique while under race conditions. Not easy, but they produced. John got two bronze medals in the 100 and 200 Breaststroke.

Ciaran, Megan and Kyle were fast,  made finals, but need to be more attentive to skills, pacing, endurance development and cool downs when at practice. This would bring them from very good to very dangerous. Despite these “to do” areas, all made finals, improved some times and Kyle picked up Silver in the 100 Breaststroke  and had the Silver in the 200 Breaststroke,  except for a technical infringement,  which cost him his comfortably earned medal in a new PB time. We all think that Kyle will not make this mistake again.

Claragh,  Cillian and Alannah swam in multiple events, multiple finals and were multiple medal winners. They too were up against quality opponents, had to work hard to be successful and make the podium. This they did and while they worked hard in training, they had to work very hard and occasionally modify what they normally do to make the podium.

The relay teams really got the excitement levels up!. We competed. We fought. We produced PB’s. We did not medal, but we split the dominance of the big clubs and significantly we were the only ‘small’ club to be impertinent enough to even try. On top of that we did so with not probably our best teams on show. Some had to get away early and thus we were weakened, but importantly Ellen in the IM and Hannah in the Free helped Claragh,  Allison and Katie to a great result for this team finishing 5th overall.

James, Faolan and Matthew got an opportunity to race too in the senior relays. They helped our team to two 4th place finishes. This was remarkable, given we were up against the cream of Ulster swimming and teams from Leinster. The remaining senior swimmers who represented their club at this level and to perform very well we’re Leon and John. Ciaran was a big miss but impending exams prevented him from participating.

So overall this was a successful championships from a swimming point of view. The coaches were very pleased with the swimmers and see there is plenty of room for improvement, through applied training, preparation and a positive and eager to learn attitude.

The club would also like to thank Ann for the tremendous job she did as Team Manager over the weekend.  Ann was supported in her role by everyone, but particularly  Maura. We also must thank Linda for her skilled management of the entries, which can be problematic  if not well managed. They were and have been all season.

Ita represented the club on Friday.  Ita is a qualified official and this gala she had the Race Starter and Stroke Judge roles. All parents were rostered by Claire for timekeeping, marshalling, turn judge and table duty. Everyone did their job and the team out of the water were effective  and deserve mention and thanks.

Results from the weekend are as follows: