Last weekend, one of the premier galas of the Swim Ireland Calendar was held in the UL Arena, swimming pool. This gala is held in the NAC in Blanchardstown and UL limerick on an annual rotation basis.

Alannah Leonard represented Sliabh Beagh at this Irish Senior gala. Alannah swam the 200 Bavkcrawl, 200 IM and 50 Freestyle. The performances from Alannah were top class. She swam a PB in the 50 Free and had a significant move in her 200 IM and Backcrawl times.  However more importantly Alannah won the silver medal in the highly competitive 200m Backcrawl event. After the heats she was lying 5th, but in the final she delivered a top class powerful performance collecting the silver and almost snatched the gold.

Well-done Alannah. You have given everybody in the club a huge boost.

Last weekend was a busy one for Alannah as she was also the recipient of the “Young Sports Personality of the Year” award for outstanding achievement in youth sport from the Impartial Reporter Celebration of Sport 2012. The award ceremony was held last Friday night in the Lough Erne Resort, Enniskillen. 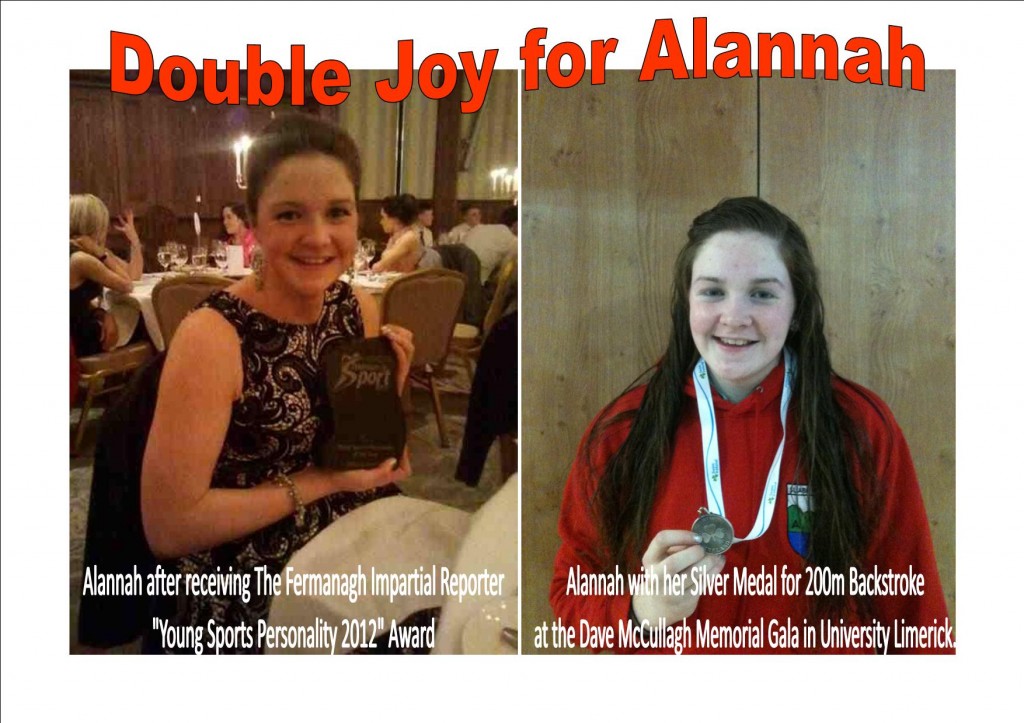 This weekend two swimmers from the club head off to compete in this National Championships Long Course gala in UL Limerick. Peter O’Hara and Patrick McKenna fly the flag in the following events, 400 Free, 200 Free, 100 Free, 200 Butterfly and 100 Butterfly. Good luck to them both.

This coming Saturday our Aquasprint team will be heading to Newry for their 3rd gala of the league, here’s hoping for a Hat Trick!!.. Dont forget Aquasprint t-shirt and Club hat. Bus leaves Monaghan pool at 1.30pm. Cost of bus €10 – swimmer, €5 – parent. Children must have parent/guardian with them. Good Luck Everybody

This gala is being organised by the club for all swimmers 16 years +, but particularly for swimmers 19 +. It is open to swimmers from Masters swim clubs, Triathlon Clubs and normal swim clubs.

The unusual aspect of this gala is that it has only two (2) distances 800m and 1,500m. These are distances that are not often available to club swimmers to compete and test themselves in. It is also an opportunity for Triathon athletes to get some distance competition in before they head for the lakes and rivers later in the year.

Details of entry etc are on the club website www.sliabhbeaghasc.ie