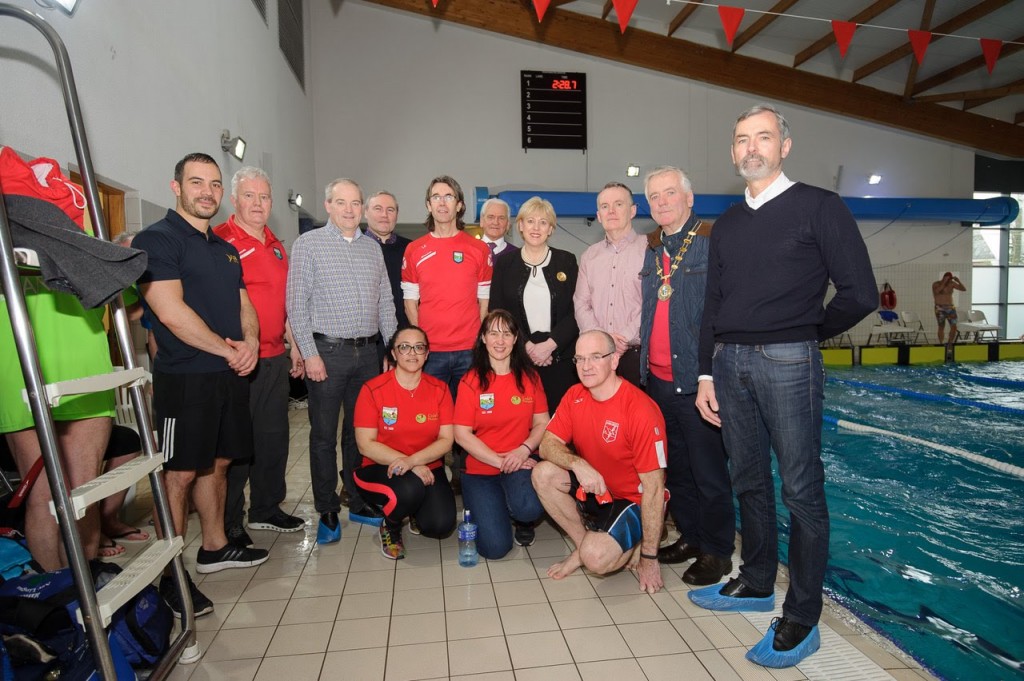 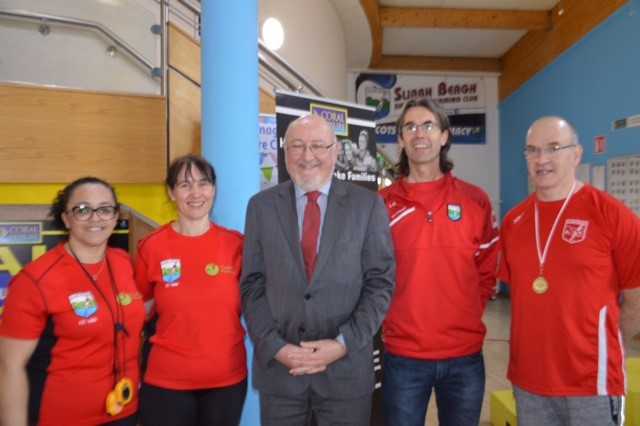 This gala was held in Monaghan Leisure Centre on  Saturday the 27/1/2018.  This was our first formal step into hosting national level galas.  This came about through two separate events.  One was the successful application for a Capital Grant towards the purchase of an electronic timing system. The other was the decision by City of Derry to not host the Masters Gala post 2017. We applied to Swim Ireland and the Masters committee gave us the slot.

Minister Heather Humphreys officially launched the gala poolside last Saturday. Minister Humphreys was supportive of our application and has always been helpful in our development. The Minister gave a short speech prior the commencement of racing, which was both welcoming to the competitors, referenced the new electronic equipment, congratulated the club and recognized the support the club received from the local Councillors and Co. Co Staff and the Pool Management.

The Swim Ireland Masters PR person and swimmer Jeff Phillips made the following observation in his e mail to all “I’ve just arrived home from the Sliabh Beagh Masters organised by Sliabh Beagh Swimming Club in Monaghan. When I got home the results were already here and are attached. Some great swims in a smart deck level pool (With free Curry and Rice afterwards). Thanks guys.”

Other very complementary comments have been flowing in to the Gala Secretary, Linda McGahon, all Sunday and Monday.

Records were set (to be confirmed by Swim Ireland when claimed by the swimmer and his/ her club). Events targeted were the 200m, 400m and 800m Freestyle. Others were the 200 Butterfly and the over 70 100 Backstroke. A big feature event was the 50m Freestyle Skins event. To make the finals (Male and Female) the swimmer must be in the top 6 finishers from the morning heats. These fastest 6 swimmers have a shootout, to see who is the last person standing. The process is Female 6 swim, last finisher is out. The same with the male race. The turnaround between each race is 90 secs. So the skills required to be the ultimate winner are. Pace management, efficient starts, turns and breakouts, fitness to recover quickly and anaerobic capacity to swim hard 5 times in a row. The winner of the female Skins was Shauna McGahon and the male race was Peter O’Hara, both Sliabh Beagh swimmers.

The age spread of swimmers was from 19+ to 73. Several of these swimmers were national champions in the past. Many have represented and do represent Ireland in British, European and World Championships as well as club galas across Ireland, and Europe. From a local perspective the entry was huge. At present the club is leading a Masters swimming coaching session every Friday night. The people attending are all determined to improve their swim skills for a variety of reasons such as leisure, triathlon, health and swim competition reasons.

There are approx. 30 attending and the bond and camaraderie and determination is wonderful to witness. The result of this coaching session, which commenced last October is that 9 of the squad entered and successfully swam in this Masters gala.  Swimmers from the club who are in this squad are Sinead Madden, Aoife McMahon, Deirdre Hennessy, Mary Farrell, Margaret Irwin, Frankie Gorman, Colum Caughey, Gregory Murphy, Joe Shiels.

Two local men who learned to swim in the old Monaghan town pool and who now reside in Dublin, also entered the gala. Gerard Monaghan and Colin Monaghan, both formerly from Dublin Road, Monaghan, who swim for Dublin Swimming Club also entered and went away with a few medals and a smile on their faces.

Next week we will supply a list of results for local swimmers and also associated photographs.

Finally, many people from the club should be thanked for their energy, planning, thoroughness, dedication and general support and goodwill. I will not mention any here. You know who you are and we all know who they are. Thank you 100%. Without this commitment and voluntary work, this successful gala would not have happened, as referenced by the email quoted and referenced above.