Last Thursday 23 June 2012 swimmers, their parents and coaches headed from Monaghan to Limerick and into the unknown.  The venue for the National Championships was the University of Limerick Swimming Arena. Accommodation was booked.  Food was planned.  The swimming events were entered some weeks earlier.  The only remaining issue was – how would they perform?

Training for the last three weeks was comprehensive, sustained, daily and tough.  But was it enough, too much too late or too early? These questions would only be answered when the swimmers hit the water on the beep from the Race Starter.

Last Friday, Saturday and Sunday all Sliabh Beagh swimmers answered all the above questions with performances of quality, speed, power, skill, endurance and a very strong will to win.  It was wonderful being a spectator watching swimming at this level of skill and commitment.

Winning medals was not an easy task.  Clubs from all over Ireland had their best swimmers entered and looking for medals.  In total 53 clubs attended.  Swim Ireland followed the World Championships format for events and officiating.  The pool was 2 meter deep throughout – ideal for fast swimming.

Sliabh Beagh swimmers brought home 31 medals from this competition.   They also were awarded 28 Finalist certificates. These were presented to swimmers who made it to the final eight but were outside the top three (medal) places. Only three swimmers, who were the youngest in the entire competition, did not make it to an individual final.  However these three swimmers produced performances that were exceptional for their age.  They were at the gala because they are exceptional and so that they could gain valuable experience for the future.

Visit to hospital… While there was joy for most we also had some pain.  One swimmer was going so fast in the last leg of the boys relay that he injured his elbow crashing the touch pad….  Ouch!!!  But thankfully nothing broken!  Get well soon Ben.

The medal haul composition was 9 gold, 14 silver and 8 bronze.  Next week we will provide a pen picture and placing record for every individual who represented the club at this gala.

The picture below was taken in the UL Swimming Arena foyer prior to the final session on Sunday afternoon.  Unfortunately three swimmers are missing from the picture.  However they will be included in the pen picture profile next week. 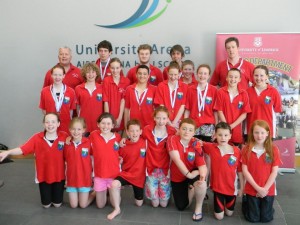 Without the hard work, selflessness, good will of the club committee, coaches, Pool Management and staff and others the tremendous results of the swimmers would not be possible.  However without the total support of the parents of the swimmers none of this would be possible.  Swimming is not an easy sport from any perspective.  It involves early mornings, late evenings, long days in uncomfortable heat and a willingness to drive long distances, eat irregularly and pay steep training and competition fees and also occasionally hotel accommodation.  Parental support is essential and while in sport success in never guaranteed, when it does arrive it is sweet and satisfying.   Well done everyone.