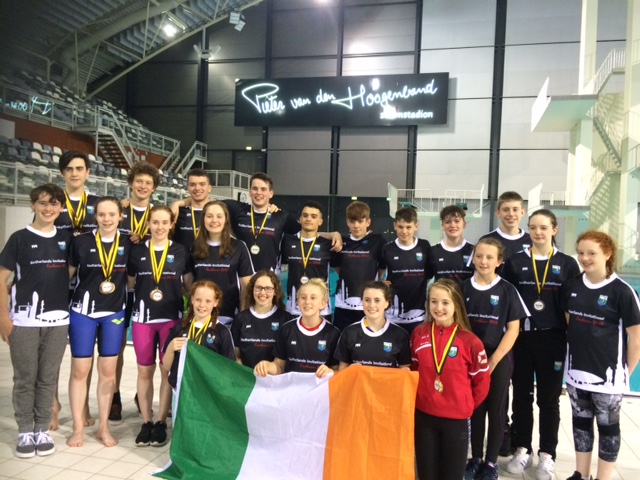 This year the club decided to try out our skills at the Netherlands Invitational in Eindhoven. The gala was held in the ultra modern, high tech centre of Dutch swimming /waterpolo/ synchronised swimming /diving excellence. The centre is named after Pieter Van den Hoogenband, a former multiple World and Olympic medalist and record holder in 50m / 100m & 200m freestyle events. We went in hope that we would be in contention for a few medal places, based on the psyche sheet issued the week before we travelled.

It was at this stage we got a feel for the size of the competition, the club’s attending and the countries represented. This small club from Monaghan was going to put our skills, fitness, determination, toughness and organisation up against 720 swimmers from clubs from Holland, Belgium, Germany, France, Indonesia, Bala, South Africa, UK and USA.

We had 3 goals this season. Get qualifying times early. Be very competitive in Ulster Age Group Championships and be ready to perform in Eindhoven, the Division 2 Age Groups (same weekend), and the summer championships in Dublin in July.  So far we have hit those targets. So well done to all who are managing, coaching and performing.

Eindhoven was a success. The planning, preparation and organisation, to put people on the plane seats to standing on the podium or achieving new PB’s was exemplary. The hotel, Best Western Eindhoven was ideally located for getting to the competition venue or to go into Centrum Eindhoven. The staff and the food were great and contributed hugely to the atmosphere.

So to the pool. We had a warm up session on Friday at the centre. We got to use the Dutch High Performance pool (a 50m 4 lane, high tech facility), adjacent to the main competition pool. We used this session to loosen out, get a bit of refresh practice on starts, turns and fast swimming; getting the body and mind in sync the day before we got into competition.

On Saturday we got to the venue, did our warm up, participated in the Opening Parade and went into race mode.

All our swimmers were asked to perform in the pre gala talk. This they did big time. Swims produced PB”s,  good skill execution, improved starts, great turns, very effective breakouts and a very evident determination to deliver. Everyone did. Not just once but repeatedly both on Saturday and Sunday. Indeed the Sunday performance possibly outdid the Saturday show.

All 23 swimmers put in a fantastic performance, not all made the podium but for those who didn’t personal best times were achieves and many finished in the top ten in their race.

The medal tally and individual results will be detailed below. The gala was very useful from a number of aspects for the club coaches and supporting trip managers and travelling parents. While not everyone picked up a medal, those that did not, showed they were coming into that zone soon.  Others had a chance to find the form they were struggling with for the last few months. This they did. So for the season that commences in September focusing on the skill aspects a little more and working a little harder and consistently are key.

To be fair to all, some had an injury interrupted season, which is hard to manage and to keep going is a big challenge and is a real test of character. It is easier to keep working when being successful, it is a lot harder when things are not going well. So we must acknowledge those who worked through, exam stress, sickness,  injury, health challenges and lapses in confidence.

Finally we would like to thank Scotstown Pharmacy and Coyles Pharmacy Castleblayney for their great support this season and wish them well in business.

We also wish Ciaran, Leon, Megan, Kyle, John and Faolan success and PB’s in the Summer Championships in 10 days time.