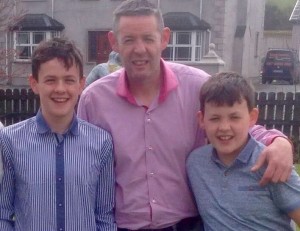 Last Wednesday 18th November our swimming club was plunged into darkness when we learned of the tragic and untimely death of one of the swimming dads, Tony Comiskey. Tony’s sons, Connor and Matthew, swim with the Intermediate and Senior squad. Their Mum, Deirdre, is an active member of the Sliabh Beagh Committee.

Tony was very proud of Connor and Matthew’s swimming achievements and although he usually stayed in the background he was always there to offer support, encouragement and sound advice to Deirdre and the boys; having the dinner ready and the fire lit when they returned home after a long day at a gala.

In recent months, Tony decided to get more involved and took the Swim Ireland level one coaching course. Coming from a strong Gaelic football coaching background he would have proved to be a valuable addition to the coaching team. Tony assisted Ita O Hara on a Saturday morning with the Development Squad and soon became very popular with the swimmers. He often could be seen crouching down beside them on deck explaining how they could improve their swimming technique.

Our swimming family rallied around Deirdre and the boys calling to the house to offer support and turning out in huge numbers to Tony’s funeral. The visible grief and anguish on the faces of our young swimmers who took part in a guard of honour for Tony as his coffin left the church will be remembered by parents and coaches alike for a long time.

The committee, coaches, parents and swimmers would like to offer their sincere sympathy to Deirdre, Connor and Matthew on their tragic loss. They would like to extend their sympathy to Tony’s mother and father, Sheila and Leo Comiskey, to his brothers and sisters and to the extended family.

Rest in peace Tony you will be sadly missed.