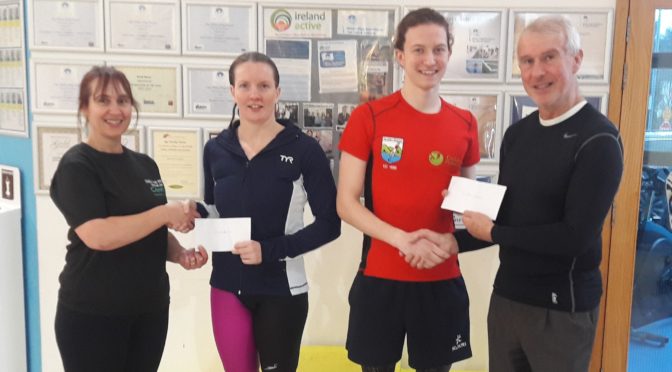 The Sliabh Beagh Masters Gala was held in Coral Leisure Complex on Saturday last the 26 Jan 2019. This was our 2nd Annual Gala. In total 93 swimmers entered the event. Most swam in at least 3 different events, some more and only 1 in one.

The events offered ranged from 50m to 800m and all strokes were included. The club ran the gala using our electronic timing system which means the times are acceptable for Provincial, National, European or World records.

The gala commenced about 15 minutes late, but finished on time, just before 6 pm. In the middle we had a one hour rest and medal presentation opportunity.

Provincial and National Records were set and have to be claimed by a few swimmers. Swim Ireland have to authenticate these, before we can register them.

In this gala we were fortunate to have a number of high profile swimmers such as Adrian O’Connor (New Ross), an ex Olympian. Adrian swam was pure class in the backstroke events. We also had the first Irish woman, Ann Cummins  to swim under 60 seconds for the 100m Freestyle. Anne swims with the Aer Lingus Club.

Another notable swimmer present was Charlotte Reid. Charlotte holds many Irish records and is also on the Aer Lingus Ladies relay team who hold the European 4 x 100m Freestyle Record. Dympna Morris, a multiple record holder at Irish, European and World level was performing in our gala. Dympna was a former Irish National Champion and she too represents Aer Lingus.

On the male side we had Marcin Tobias, Karl McElwaine, Joe Shiels, Colin Gorman and Callum McCaughey. Again, all picked up medals and they too were successful with our relay team.

One of the popular and exciting events in our gala is the 50m Skins Event. Basically the 6  fastest men and women from the heats qualify for a sudden death shoot out, where 6 are reduced to 5 ( last man/woman is eliminated), until only 2 are left. The winner from these two get a prize, not a medal. The photo below shows the winners Charlotte Reid (Aer Lingus) and Colin Gorman (Sliabh Beagh) receiving their prize from Sinead Madden Chairperson Sliabh Beagh and Declan Hart, President Swim Ireland

Overall the feedback from the competitors verbally and through the various multi media systems is that the gala was a success from both a competitive and social aspect. A great atmosphere was noted by everyone.

This was due to many things, most importantly people. Our people, starting with Linda McGahon as Gala Secretary, Claire Sheridan Club Secretary, Louise Skeath IT, Aidan Campbell PR and Trophies and all the parents and members who did the multiplicity of tasks from equipment, set up, food, timekeeping, turn judges, Entry administrators, starters and equipment removal team, all deserve recognition and praise and thanks.

Coral Leisure Staff were also a key element and facilitated us in every way requested. We thank them wholeheartedly.

Finally, our North Monaghan Councillors Padge Connolly, Sean Conlon, Senator Robbie Gallagher and TD Caoimhin O’Caolain, who came to meet our competitors and present them with their medals. Apologies were sent by Cllrs Raymond Aughey and Seamus Treanor and Minister Heather Humphries. We thank you for your support and encouragement.

Monaghan was visited by 93 swimmers from all over Ireland, North, South, East and West. some stayed overnight in our town. This was a very positive experience for all and many indicated it was their first time in Monaghan and that they would return in the future.

A selection of photos from the prizegiving and action are featured below.