Four of the club swimmers took part the annual Ballybay Sprint and Olympic Triathlon on Saturday 22nd July.  As the competitive swimming season is over it is a good opportunity for swimmers to participate in other events that allows them to reap the rewards of their hard work throughout the swimming season. 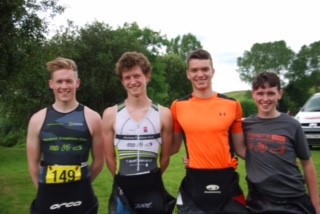 The Sprint event involved a 750M swim in Lough Major followed by a 20K cycle and a 5K run. Colin Gorman and Danny Madden completed the Sprint event with Leon Campbell swimming for a relay team.