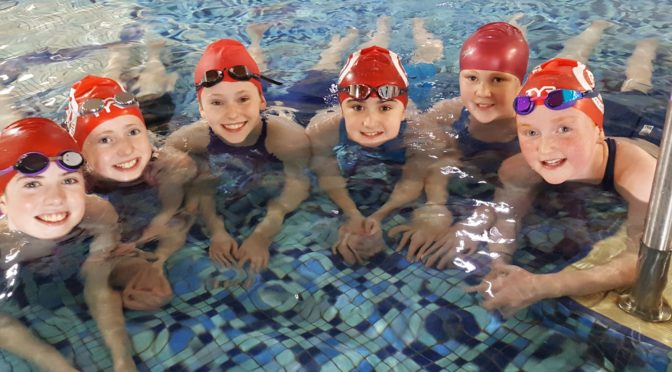 The club hosted our first Junior Open Meet last Saturday. The Meet was a niche event, in that the events were mainly 200m distance in each stroke with a special 50m Butterfly Skins event. In total 212 individual entries were received. Swimmers from all over Ulster and North Leinster took part.

The swimmers from each region performed superbly. There were some high skills immersed on show, from our club and others. Many were seeking qualifying times for Ulster and National events and many succeeded in doing so. Plenty of Personal Best times were recorded, with our own SLIABH BEAGH swimmers managing 45 PBs.

Some of the highlight swims on the day were in the 50m Skins event. Five SLIABH BEAGH swimmers; Colin Gorman, Leon Campbell, Peter O’Hara, Matthew Skeath and Adam Lynch made up all but one of the eliminator spots. Leon and Peter were two of the three left standing with Colin coming out on top after a very tight eliminator race. The girls were also very close with Rachel Wolseley of Templemore ASC being the eventual winner, beating our own Allison Gorman in the final. Other swimmers from the club in this final were Hannah Skeath and Katie Bowden and Katie Trainor.

Great performances were also seen by other swimmers who are steadily climbing the competition ladder. These include, Aisling Duffy, Alice Trainor, Katie Trainor, Hannah Sheridan, Maddie Smith, Rebekka Gillis, Susie O’Flaherty, Ally McCarron, Darragh Hughes, Adam Lynch, Eanna, Conor and Rudhan Curran, Ellen Mc Geough, Sheenagh Mc Kenna and Daniel Madden.
Many of these swimmers produced PBs, showed some excellent improvement in their skills and with attention have the ability to progress up the competition ladder.

This event brought 105 swimmers, their parents and coaches to Monaghan, many for the very first time. They were delighted with the welcome, hospitality, the facility, the event and the opportunity to experience a new place. The feedback to date has been very positive and we hope to run this event again in 2020. By then, if the Capital Grant Funding Application has been successful, we may have new starting blocks in-situ and also FINA standard anti wave ropes installed, so watch this space!

Organisation and planning are paramount to the success of such an event. For this the club wishes to extend a special thank you to many teams including those involved in managing entries, timekeeping, our marshalls, the medal presentation team, the culinary team, those involved in IT, the lifeguards, the Swim Ireland officials, the announcers the PR team and our Sponsor. All contributed with grace, a can-do attitude and exemplar professionalism.

We would also like to extend thanks to Coral Leisure who of course provided the venue for this and many other events time and time again.
Well done everyone. We look forward to next year.