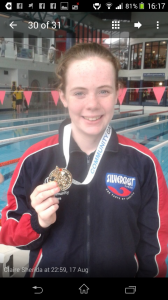 Claragh aged 12, works hard at all her strokes and distances which is important in age group swimming. Even though she excels at backcrawl, it is vital not to specialise in a certain stroke until at least aged 16 or above. The training in Sliabh Beagh encourages and nurtures this with a great diversity of training sessions, led by head coach Eamon O’Hara.

Claragh’s hard work paid off earlier in July this year at the All-Ireland division 1 age group championships. She claimed a silver medal in the 1500m freestyle event and reached finals in 100m & 200m butterfly events, the 100m & 200m backcrawl events, the 200m & 400m Individual Medley events and the 800m freestyle event finishing in the top 8 in the country in all these events. Keep up the great work Claragh and we’re sure there will be plenty more successful days for you in the future.

Huge congratulations also go to Alannah McGahon on winning a  bronze medal in the U10 25m backcrawl event at the National community games finals in Athlone last weekend. At only 8 years of age this is Alannahs 3rd national community games final. In 2013 when Alannah was 6 she reached the U8 25m freestyle final finishing in 5th position. She returned in 2014 after a good year of training with the Sliabh Beagh Aquasprint squad and claimed an impressive gold medal in the U8 25m freestyle event.

In that same year her sisters Shauna & Claragh both won gold medals in the U16 50m butterfly and the U12 50m backcrawl events respectively, a remarkable achievement for the 3 siblings.  Their brother Cillian also reached finals both this year and last in the U12 50m breaststroke event but he just missed out on the medal positions.