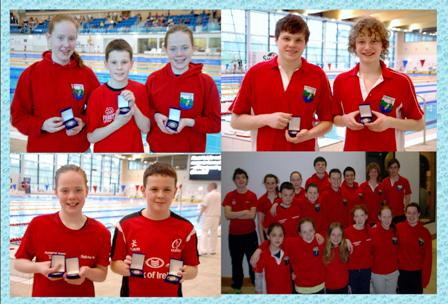 Last weekend The Ulster Age Group Championships were held in The new  Aurora  50 metre pool in Bangor.  This prestigious event attracts swimmers from all across Ulster from age group 9 to 11 and up to 16 yrs for girls and 17 yrs for boys.  The best in Ulster competed over the weekend for a few coveted places.  For the majority it was about achieving personal bests and rising to the challenge of racing in a 50M pool.  17 Swimmers from Sliabh Beagh travelled to Bangor, 14 competed in individual events and 3 took part in relay teams.  Of the 14 swimmers who took part in individual events  11 reached finals.  This is a fantastic achievement for a small club and demonstrates the level of commitment by coaches, swimmers and parents.

There were some exceptional swims over the weekend especially by some of our younger age group.  Claragh Mc Gahon came first in the 100

The next Aquasprint gala takes place this Saturday 5th April against Newry and Mourne.  Warm up is at 6pm.  Parents should check the club notice board for allocation of jobs for Gala.  Club gear should be worn.  Parents please supply refreshments for Away and Home Team