Seven club swimmers competed in this National event in UL Arena Swimming Pool over the weekend 28 – 30 June 2013. In all there were 528 swimmers competing for National Titles. Sliabh Beagh swimmers took home 4 gold, 4 silver and 3 bronze medals. All swimmers produced personal best times and gave of their very best in every event.

Conor Comiskey swam in several events and had a few personal duels with a few similarly young boys in the 100, 200 and 400 Freestyle events as well as the Butterfly 100 and 200m events. Conor excelled in putting in exemplary performances in the Freestyle events collecting 3 medals and in the 200 Butterfly event collecting a Bronze medal.  He also performed very well in the 100 Fly event but came up short in this event on the medals.

Ciaran O’Mordha entered the 100 and 200m events in both Freestyle and Breaststroke. Going into the gala Ciaran would probably have said he had a medal chance in the Freestyle rather than the Breaststroke events. As it turned out he collected Gold in the 100m Breaststroke and bronze in the 200M event. He was most unfortunate not to win a medal in the 100 Freestyle event. In this event he went into the race as the slowest qualifier, however from the start he lead the race to the 80m mark when fatigue just caught up with him and he was squeezed out of the medals in the final touch on the finish pads. Ciaran was also very unlucky as just 15 minutes prior to the freestyle final, he was competing in the very tough 200m Breaststroke event which saw him battle hard for gold but eventually ended up with Bronze. Another swimmer Orla young swam in the 100, 200 and 400 Freestyle and 100 and 200 Breaststroke and Backstroke events. Orla produced some great swims and numerous PB’s. She also won Silver in the 100 Backstroke and silver in the 100 Breaststroke events. These were demanding races and very competitive with very large entries. Orla produced some very high quality and technically sound swims to bring home the PB’s and the medals.

Jamie Sheridan had a high octane weekend.  He swam the 100, 200 and 400 Freestyle and 100 and 200 Butterfly.  Again there were very competitive events where one error was punished by very ambitious and talented opponents.  Jamie really delivered in the Butterfly event where he collected a Silver medal for 200 fly.  In the Freestyle he was squeezed out of the medals and into 4th place in the 100m event final.  Jamie produced PB’s in all swims and really has set himself up to push forward next season.

Ciaran Hennessy had a very busy weekend swimming the 100, 200 400 and 1500m Freestyle events and also the 100 and 200m Backstroke events. Ciaran really delivered last weekend with top class performances in the 200, 400 and 1500m events, collecting gold in the 400 and 1500 and silver in the 200 race. He also collected gold in the 200m backstroke event and silver in the 100 freestyle and backstroke events. PB’s were produced all through the weekend with Ciaran also gaining qualification times for the Youth and Senior National championships later in July in Dublin. Ciaran’s efforts over the weekend left him very tired on Sunday but like a real trooper he battled on and made the winner of the 100 Freestyle event earn his gold medal.

Eimear McKenna swam in the Freestyle, Backstroke and Breaststroke events during the weekend. Eimear did not collect medals but Eimear did pick up PB’s and also learned a few things that will help her in the coming season.  Again it is a very competitive age group and many swimmers are trying to gain qualification for the Division 1 Championships in July. So not getting a medal is not a big surprise as competition is fierce. However it is critical for the swimmer and coaches that we all learn from what we witness and observer so that we can address the needs of the swimmer / swimmers technically and fitness wise in the coming season.

Finally, we had Megan McShane swimming in her first senior level gala. Megan is a talented swimmer who achieved her qualification times late in the season. Megan only trains with the Aqua Sprint squad and this is at a low training base compared to the people who were attending this event (including those from our own club). Megan swam in the 100 and 200 Breaststroke, 200 IM and 200 Freestyle events. Megan really showed that she has a natural talent but needs to develop her endurance and race awareness in the coming season.  This will not be a problem as Megan will be in the Intermediate squad and under Coach Tomasz or Sarah she will get effective training and the experience she will need to succeed next season.

In general the club were very excited about the performances of the seven swimmers and the learning that the event gave all of us. At this level nothing come easy and without the combined skills of technical proficiency, excellent fitness in all energy levels, race experience during the year and applied attendance at training, progress at this level and to the next is unlikely.  So well done everyone and keep up the good work.

The Clubs Division 1, Youth and Senior swimmers continue to train in preparation for the National Championships from the 18 to 21 July. Last week we spent 3 days in the Brand new Aurora 50m Pool in Bangor training twice a day there. This week we are training in the Magherafelt 50m pool also twice a day. The purpose of this Long Course training is to help the swimmers bodies adapt to the different demands of swimming in a longer pool. The National competition from the 18 to 21 July is a long course gala so preparation is important. 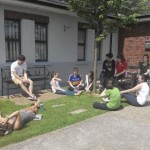 The club in tandem with the Monaghan Leisure Complex is running a Level 1 course at present.

The course has 15 candidates from all over the region. The first weekend concluded on Sunday the 7 July and the next weekend is from the 12 to 14 July.

Good luck to all candidates in their assessment and exam. 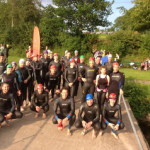 Last Friday night 5 club swimmers took part in this event.  Ciaran Hennessy won the event in a time of 1 hour and 3 mins.  Patrick McKenna was third in a time of 1 hour and 9 mins.  Oran McGee and Emily Madden (both very young swimmers) were a two person relay team doing 2.5 KM each and Sinead Madden completed the line-up and covering the full distance in a very respectable time.

Well done to all and enjoy the summer doing the triathlons.

Last weekend Peter O’Hara crossed the pond to compete in the NW Masters championships which were held in Blackpool in the UK. Peter swam in 6 events and delivered a PB in all bar 1 event. He was also on the medal rostrum winning silver in the 100 Freestyle, 50 Butterfly, gold in the 100 Fly and bronze in the 50 free. He also swam the 100 IM finishing 8th overall and the 200 Free which is best discussed no further he says. Competition was tough with swimmers from all over the UK attending. Many are preparing for the World Masters event which is being held in Eindhoven at the beginning of August.

Well done Peter on this performance and it is also a first for Sliabh Beagh club swimmers to go overseas and compete at this level.